BARCELONA has sold an additional 25% of its in-house production company in order to save its summer signings.

Barca are facing serious financial problems and are yet to declare the recent arrivals of Robert Lewandowski, Raphinha, Franck Kessie, Andreas Christensen, Jules Kounde and Ousmane Dembele, who have signed a new deal.

However, the club are confident the matter will be dealt with after the recent deal which saw them raise £85million.

According Daily Footballthe deal will allow them to register “a number” of their new players this week.

According to the Mail, the Blaugrana have activated their fourth ‘economic lever’ after signing an agreement with Socios.com to sell 25% of their stake in Barca Studios last month. 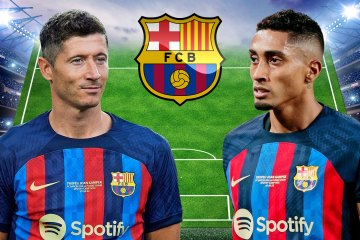 And the Catalan giants’ latest deal has been with Orpheus Media.

Barcelona released the following statement: “With this investment, the strategic partners of Barca Studios show their confidence in the value of the project and in the future of digital content in the world of sport.”

Barcelona haven’t been able to register their new signings as they are currently too close to their spending cap.

Barcelona faced the dilemma of selling Manchester United and Chelsea target Frenkie de Jong or offloading another 25% of Barca’s studios to Orpheus Media.

Eventually, they chose to sell another part of their production center.