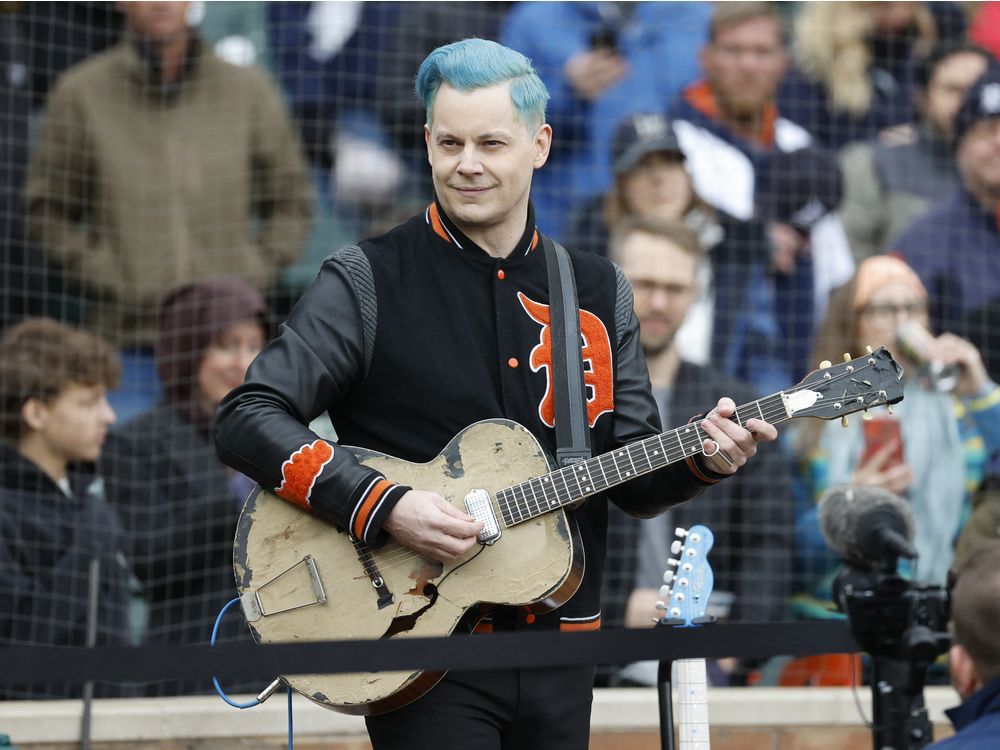 Most touring rock musicians have predefined setlists for their gigs, which makes life a bit easier for the creative tour producer in terms of planning art direction, set design, lighting, and projections. Jack White, meanwhile, navigates through a catalog of over 100 songs in concert, which could easily trigger migraines for a creative producer not knowing what track to expect at any given time.

Either way, Montrealer Matthieu Larivée and his team at Lüz Studio have long come to terms with White’s free ways, having handled his 2018 Boarding House Reach tour and, currently, his Supply Chain Issues tour, which is hitting the Square. Bell on Saturday, not to mention White’s road shows with the Raconteurs. Or at least that’s what they had thought.

Nothing prepared them for White’s tour debut in Detroit on Friday. Unbeknownst to almost everyone, White, a Detroit native, decided to propose to his girlfriend Olivia Jean, a singer and his opening act, about 80 minutes into his set – in the middle of the Song Hotel Yorba. After White retrieved his mother from the audience, he and Jean were married onstage a short time later during an encore.

“No one – not his team, not his managers, not his closest friends – had any idea this was going to happen,” Larivée said in a phone interview. “The audience had no idea what was going on. We were all completely taken by surprise.

It’s one thing to take a spontaneous approach to doing atmospheres on a white show without knowing in advance what’s coming. But Larivée and his team had no wedding-themed effects to project on stage for this occasion.

“It can be a challenge working with Jack, but it keeps us on our toes and keeps us sharp. Even within a song, he can stop and jump into another song, put down his guitar and switch to the piano. It can be quite dramatic,” Larivée said. “The first time we worked with him, we took the approach that we would do a bunch of pre-made visuals and lighting images, and if he did a certain song, we would go with that. And if not , we would improvise, but what we were doing was really just a reaction.

“As a designer, that’s usually great because you can immerse yourself for three or four months in the creative process and then come up with a package for most tours. Then you can let it go to the tour team. But not with Jack. So for this tour we changed our approach and decided to go with aesthetic blocks, which he signed. So no matter what Jack plays, we follow our own show flows and then we stick to it. We have our own progression. We create this arc and Jack plays within these limits. So visually there is a show flow that works and musically it can improvise in its own world.

In the 17 years since he founded Lüz Studio, Larivée, its creative director, has lit up stages with all kinds of visuals and effects for Billy Idol, Jennifer Lopez, Carrie Underwood, Half Moon Run, Roch Voisine , Jason Aldean and Weezer. But White stands out from the rest of the band, and not just in terms of a dogged musical approach.

White is an analog man in a digital world. He doesn’t even have a cell phone.

“We’ve developed a high-tech way of working with Jack, which is fun because Jack is the complete opposite of high-tech. Everything is analog. … His audio consoles are still analog. Our way of working is very digital. We even use AI. But when you see his show, you don’t see that.

The Supply Chain Issues Tour will take White through North America, South America, Europe and Japan, among other parts of the planet, before wrapping up in the fall.

“That’s also part of the challenge with Jack,” Larivée noted. “Besides not having set-lists, he mixes it up with venues, sometimes doing theaters as well as arenas. But the whole must be scalable. And always blue. Like White’s hair now.

Larivée had no internal contacts when he first decided to expand the wings of his business beyond our borders.

“I just went to LA and knocked on doors, showing what we could do. At the time, dropping the name wasn’t a cool thing to do, not that they even knew who we were working with here.

Monotone, the music management company looking after White, had another band on its roster, alternative rock band Broken Bells, whose manager was smitten by Lüz Studio’s work and accepted. And the rest fell into place.

“The beauty of this business is that there’s never a dull moment. Anything can happen at any time. After marriage, it’s hard to imagine how Jack could do better. … But you never know .”

Sign up to receive daily news from the Montreal Gazette, a division of Postmedia Network Inc.

Thank you for your registration!

A welcome email is on the way. If you don’t see it, please check your spam folder.

The next issue of Montreal Gazette Headline News will soon be in your inbox.

We encountered a problem during your registration. Try Again