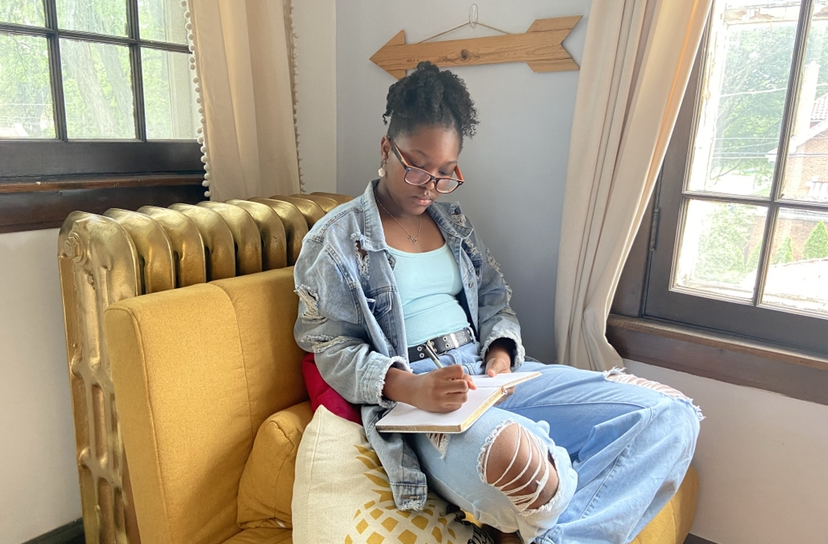 Avery Kelley always knew she wanted to work in entertainment.

When she was little, watching her parents’ television, Avery would stare at her, point at the screen and say, “I want to be in there.”

Her love for the media stayed with her, and Kelley went on to pursue singing, dancing, and finding a passion for writing.

Avery’s passion for entertainment led her to become CEO of her own production company, Inspired Melanin Inc., before she even graduated from 8th grade.

Inspired Melanin, who regularly partners with other foundations to give back to the community, has worked with Ronald McDonald House, raised funds for supplies for self-care kits for under-sheltered teenage girls and donated Rubik’s Cubes to local middle school students. Her latest project involves collecting duffel bags and luggage tags to give away to foster children in her hometown of Chicago.

Last year, Avery’s mother, Amy, had a friend post a story on Facebook about two girls in foster care who needed clothes. After learning more about them, Avery discovered that many foster children have to use trash bags to carry their items from house to house.

“The sheer symbolism of it makes it seem like their stuff is worthless, just because they’re in a little different scenario than other families and other kids,” Avery said. “Their things don’t deserve to be in a trash bag. They should be in nice luggage. They should be in a bag they can call their own.

So Avery teamed up with another family friend who works with different welfare agencies across Chicago to collect the bags and donate them to those in need.

Through a link on Amazon for the initiative, called “Love Carry On,” people can purchase the duffel bags that will be sent out so Avery can give them to those in need.

Giving back is something Avery has always known she wanted to do since founding Inspired Melanin in 2019.

What is the cheapest day of the week to refuel?

“I strongly believe that God places you on this earth to use your talents to help others,” she said.

Part of the reason Inspired Melanin, Inc. was created was to help other people, namely young black girls like Avery, who felt underrepresented in the media.

“I wanted to be able to create something that shows all walks of life in a way that they deserve to be seen,” Avery said. “What I want to be able to do is just show that even though I’m young, even though I’m a 14-year-old black girl, I can write stories that can resonate with people and share stories that resonate with people. people, scripted or unscripted.

Documentaries Avery has made, such as “Soul Train, Soul Change,” detailing how the show broke barriers in the entertainment industry and its importance in the civil rights movement, have won awards. A short film she wrote, “Back Row”, features aspects of her own life. Last year, Inspired Melanin worked on a documentary called “One Step at a Time,” about a Chicago dance studio on the south side of town.

Avery hasn’t stopped working, even after COVID-19 halted some aspects of production. Since then, she has been live-streaming a virtual show called “Teendom Talk Show”, which is released on YouTube and Facebook.

Avery says sometimes people underestimate her because of her young age. They assume that it’s just her mother doing all the work, or that Avery, being a teenager, doesn’t have the skills to produce or direct.

Amy Kelley said there were certain programs or competitions that wouldn’t even allow Avery to participate because she wasn’t yet 18, even though “she works harder than most adults I know.” .

Avery’s mother, Amy Kelley, tells her daughter that when people are negative, she should let her light shine “how it’s supposed to shine”.

“Everything else will come into play after that,” Amy Kelley said.

Having a “fantastic” support system, like family and friends, has helped, Avery said.

“I know there are people, no matter who you are, who just aren’t going to like what you’re doing,” Avery said. “It’s okay because not everyone will be on your team. But I know I can do it, I have confidence in myself. I know that others have confidence in me and that helps me get by on a daily basis.