Six trucks, a team of 250 people, more than 35 cameras and optical fiber throughout the campus are deployed

After more than three years of front office shakeups and pandemic-related hurdles, the CrossFit Games are back in full swing this week at Alliant Energy Center in Madison, WI. And the production team is on site at full strength, returning to 2018 gear levels with an army of CrossFit Games production veterans. Deploying six mobile units, a team of over 250, over 35 cameras, and a full campus-wide fiber backbone, this year’s operation lives up to the massive productions seen during the peak of the CrossFit Games.

The CrossFit Games return this week to the Alliant Energy Center in Madison, WI.

“We’re basically back to full to where we left off in 2018 before the nature of the Games changed,” says Lead Coordinating Producer Joe Novello. “And it’s exciting to have all the greatest talent we’ve been able to recruit over the years back. Walking through the compound this year made me smile because it felt so much like where we left off. things at the end of 2018, and I immediately felt like we were really back.

CrossFit worked with Hamilton Road Productions and its HRP Live division to produce the five days of live streaming and broadcast, which began yesterday and will end on Sunday with a two-hour broadcast of the individual finals on CBS. Prior to HRP’s arrival in 2019, CrossFit produced the Games in-house (although most of the freelancers in those years were still part of the core team).

HRP Owner / Executive Producer Charlie Dube is a longtime veteran of CrossFit Games production, as is Principal Director Mike “Rothy” Rothwhich has been working on CrossFit Games broadcasts since 2011. This week marks the culmination of months of work for HRP, which also produced the CrossFit Games Open and Semi-Finals, as well as the Miles to Madison behind-the-scenes docuseries. 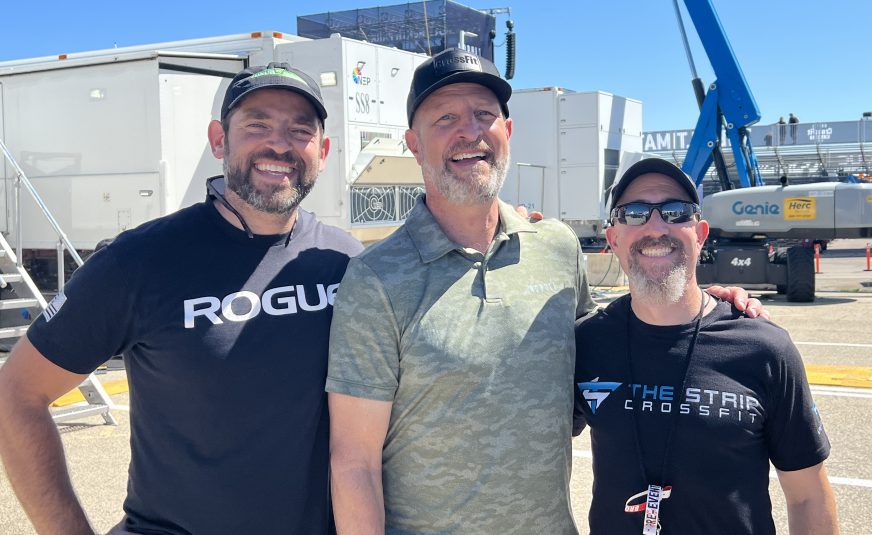 From left to right: Charlie Dube of HRP, Joe Novello of CrossFit and Mike “Rothy” Roth of HRP

“We’ve had three cracks on this already, since we worked together on The Open, then the quarterfinals and semifinals and now the Games,” says Dube, who has been a producer at CrossFit Games since 2013. “As a result, the same faces keep popping up at every event, so there’s a lot of shared learning across the board.

“We’re here for the long haul,” he continues. “Our goal is not to build a big show this year – although we obviously want to do that – but rather to build something that is more [sustainable] long-term so you don’t have to recreate the wheel every year. I think it will allow us to react faster and be more agile when a curve ball is thrown at us, which happens often [at CrossFit Games].” 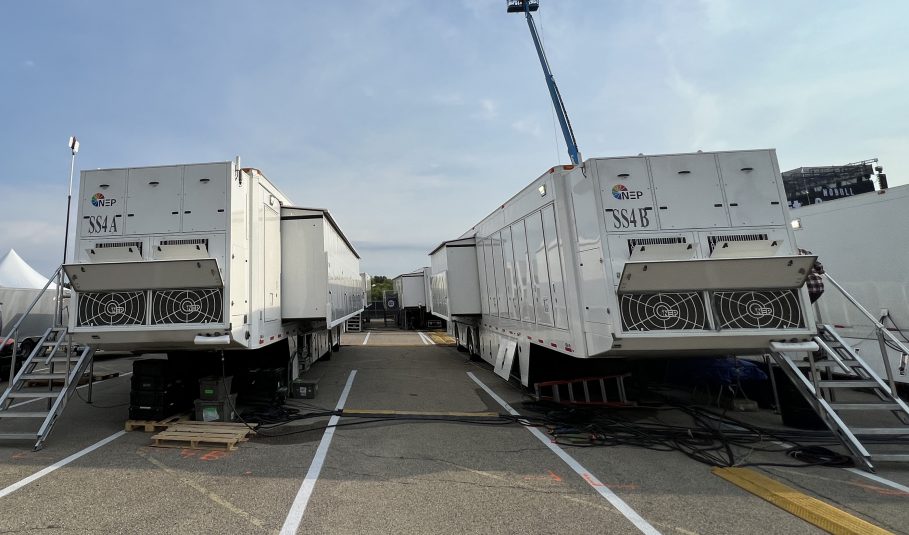 NEP has deployed Supershooter 4 A, B, and C units for the 2022 CrossFit Games.

“It’s a tough sport to cover because you don’t know how it’s going to pan out until you see it live. So we absolutely have to be covered,” he explains. until the start of the Games, so you have to be ready to adapt and have all the necessary equipment to [pivot] at any moment.”

NEP Supershooter 4 (units A, B and C), Supershooter 8 and ST8 are parked in the compound. CP Communications, which handles all Madison-related RF and cellular needs, is also on hand with a 53-footer. Arctek Satellite Productions will have two C-band satellite trucks (Arctek Black and Purple) that will provide return transportation for the CBS broadcast on Sunday.

CrossFit and HRP Live worked closely with the Creative Technologies (CT) division of NEP and CP Communications to create a unified fiber optic backbone to serve both broadcast and campus operations across the expansive campus of the Combining Energy Center. For more than a week before the start of the Games, the fiber team was on site, running hundreds of miles of fiber across campus, which includes NOBULL Coliseum, ROGUE North Park Stadium and numerous fan activations and festival-style facilities. .

“Our goal this year was to integrate all programs on campus and spread [infrastructure] under one umbrella,” says Roth. “Previously, if we wanted to talk to someone about the audio level in one of the sites, we had to ask someone from our team to talk to someone from that team, and that was a huge hassle; now everyone is on the same team. This allowed us to be much more efficient in terms of equipment and manpower and eliminated many of the problems we had in the past. There are no more silos, just one big happy family working together. 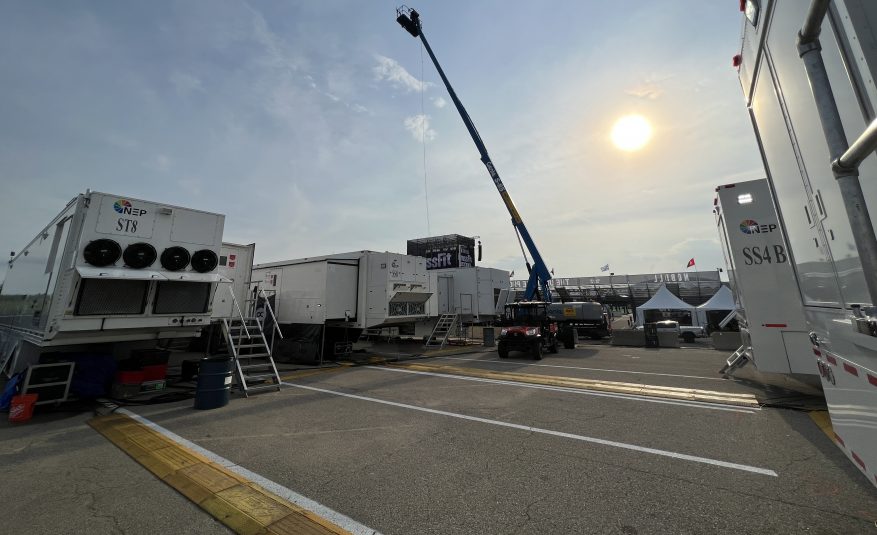 CrossFit Games production has returned to 2018 equipment levels and has five NEP mobile units in the compound.

On the audio/comms side, the entire CrossFit Games operation runs on a single Dante-over-MADI IP network for broadcast and campus audio needs.

In addition to the live operation, HRP deployed its documentary team to capture footage for the Miles to Madison series and other original content efforts. Armed with more than 10 RED cinema cameras and a super-fast Phantom camera, the team ingests content into a NAS directly linked to the broadcast team’s EVS IPDirector.

“With the way it’s set up, [the live-production team] has access to everything the documentary team shoots,” notes Dube. “They’re there to shoot behind-the-scenes content, beautiful scenery, and spectacular shots of the playground. We can use that in our before and after shows, and we can fit all of that into our CBS Sunday show, which gives us an additional level of quality.

In addition to the expanded technical infrastructure, according to Novello, this year’s CrossFit Games production benefited from a more defined leadership structure. 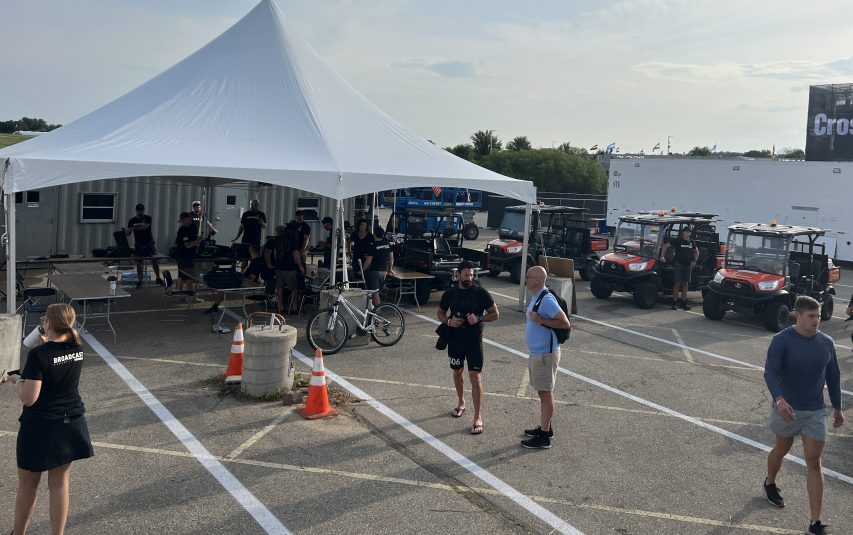 Mike “Rothy” Roth calls the CrossFit Games “Broadcast Summer Camp” because so much of the crew comes back every year and the atmosphere is family-friendly.

“HRP Live was able to recruit many of the best talent we’ve ever had at the Games and place those senior executives in key leadership roles,” he says. “[Previously], we were unable to do this internally within CrossFit as we are not a traditional production company. This allowed these people to participate in the design phase of setting up the CrossFit Games rather than just showing up and understanding once they got here.

While details of the CrossFit Games competitions are still being kept under wraps, Novello says this year’s event will expand beyond the two main venues. With this in mind, related cellular mobile production systems will be heavily considered in live coverage of new events.

“We’re being asked to do new things offsite that we’ve never done before,” he says. “These challenges raised the stakes for the production and engineering teams, and they came up with great solutions. The new events we hosted this year required us to start using linked cellular to help us get off campus and be able to cover events in a unique and different way. 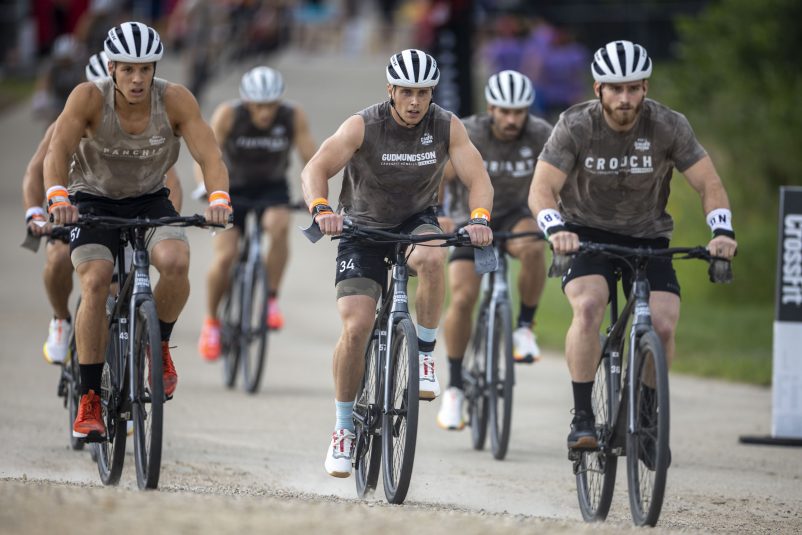 “Using bonded cellular,” Roth explains, “we could keep all of our production facilities here on campus, but get people and equipment where they need to go without having to park a truck somewhere. We can use the same people and the same facilities, but we still go pretty much anywhere we want. We’ve done cell testing across the city, and CP’s experience and expertise in [bonded cellular] gave us the confidence to go with the technology.

Although all eyes are on Madison this week, big things are coming for the CrossFit Games. under new Managing Director, Sport, Justin BerghCrossFit is looking to grow the competitive ecosystem and Novello’s production team is preparing accordingly. 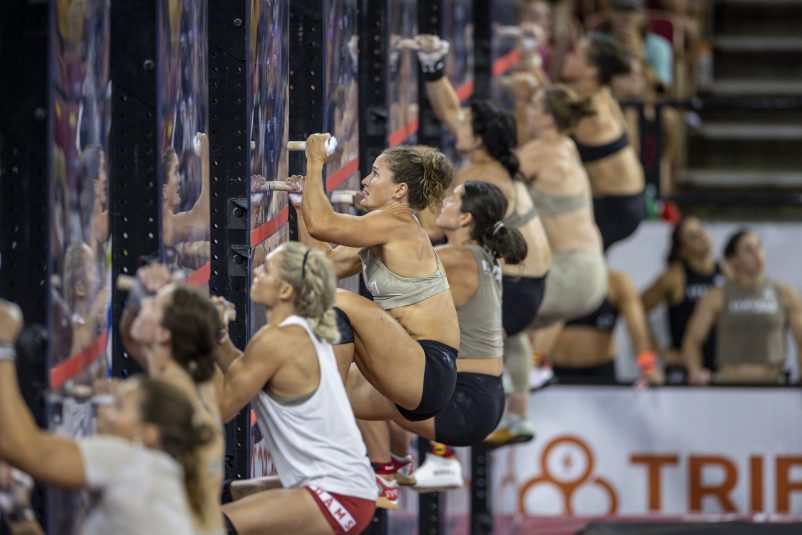 Each year, the CrossFit Games crown “the fittest man and woman in the world.”

“It’s been a long road over the past few years,” says Novello, “but I can promise you this: We’re committed to the CrossFit Games and we’re committed to growing the sport of competitive fitness. We’re going to increase our commitment and have plans expansion in both the way we cover the sport and the number of events. From a production and engineering perspective, we need to be ready to adapt and be flexible in order to be ready to everything that comes our way.